How to Install Anbox in Elementary OS Hera 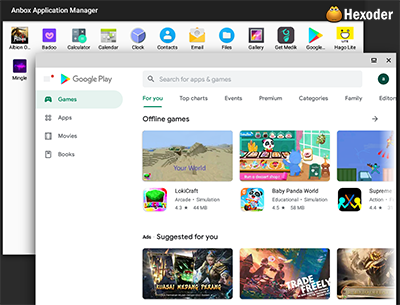 Hello guys, Today I would write an article about how to install Anbox in your Elementary OS? Have you heard about Anbox? Yes, Anbox is like an Android Emulator but it’s different. So let’s read my article below here.

Anbox is a container-based approach to boot a full Android system on a regular GNU/Linux system like Ubuntu. In other words: Anbox will let you run Android on your Linux system without the slowness of virtualization.

There are may Android emulator out there but why we must choose Anbox for our Elementary OS:

Example to uninstall some of your APK

How to Install Anbox

See at kernel, the ashmem and binder must be true, if not then you have to install this

You have to install ADB first, then you are able to install apk directly via command line.

If adb devices already running, then you are able to install apk via command line.

Anbox doesn’t have playstore as default, so we have to install it manually.

In case if you want to remove Anbox completely.

I will list all the Anbox problem at here. And currently for this time, I mostly got problem with No Internet Connection in Elementary OS every time after I turn on my PC.

My experience using Anbox is very great. It feels like I run native android application in my linux. My PC temperature is cool, So far difference when I use Genymotion or Android emulator.

Anbox has problem with running a game, actually I’ve read many people have successful to run a popular game with Anbox like PUBG, Ragnarok M Eternal Love, etc. After trying hard to research, and yes, I still failed to run any 2D/3D game via Anbox. I don’t know how to solve this, maybe there is an issues with my graphic card (I use NVidia) or GLES version (still mystery).

So if you looking for android emulator that run a game, Anbox is not a best tool for you. But, you can try the Anbox Cloud Based since they’re support to run 2D/3D game. But I think to use Anbox Cloud Based is not free. Just try to contact them at here.

This tutorial are tested and successfully to run Anbox in elementary OS Hera.

If you found any problem by following this tutorial, just feel free to leave a comment below. I will help you as soon as possible.

Thank you so much for reading my article.